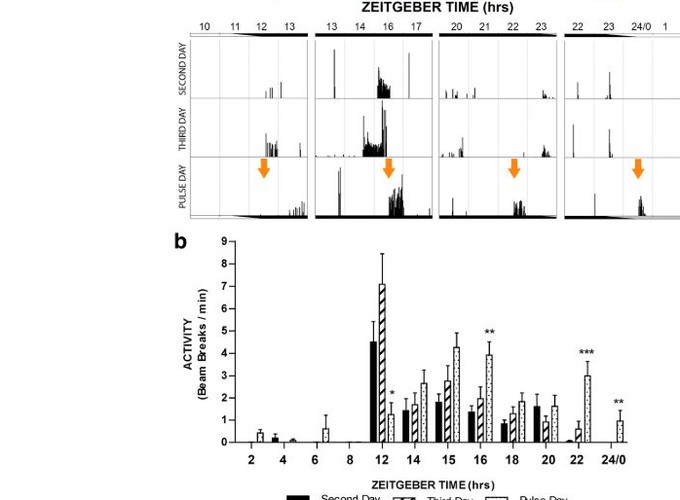 Host-seeking behaviours in anopheline mosquitoes are time-of-day specific, with a greater propensity for nocturnal biting. We investigated how a short exposure to light presented during the night or late day can inhibit biting activity and modulate flight activity behaviour. Anopheles gambiae (s.s.), maintained on a 12:12 LD cycle, were exposed transiently to white light for 10- min at the onset of night and the proportion taking a blood meal in a human biting assay was recorded every 2 h over an 8-h duration. The pulse significantly reduced biting propensity in mosquitoes 2 h following administration, in some trials for 4 h, and with no differences detected after 6 h. Conversely, biting levels were significantly elevated when mosquitoes were exposed to a dark treatment during the late day, suggesting that light suppresses biting behaviour even during the late daytime. These data reveal a potent effect of a discrete light pulse on biting behaviour that is both immediate and sustained. We expanded this approach to develop a method to reduce biting propensity throughout the night by exposing mosquitoes to a series of 6- or 10-min pulses presented every 2 h. We reveal both an immediate suppressive effect of light during the exposure period and 2 h after the pulse. This response was found to be effective during most times of the night, however, differential responses that were time-of-day specific suggest an underlying circadian property of the mosquito physiology that results in an altered treatment efficacy. Finally, we examined the immediate and sustained effects of light on mosquito flight activity behaviour following exposure to a 30-min pulse, and observed activity suppression during early night, and elevated activity during the late night. As mosquitoes and malaria parasites are becoming increasingly resistant to insecticide and drug treatment respectively, there is a necessity for the development of innovative control strategies beyond insecticide- treated nets (ITNs) and residual spraying. These data reveal the potent inhibitory effects of light exposure and the utility of multiple photic pulses presented at intervals during the night/late daytime, may prove to be an effective tool that complements established control methods.

Supplementary notes can be added here, including code and math.