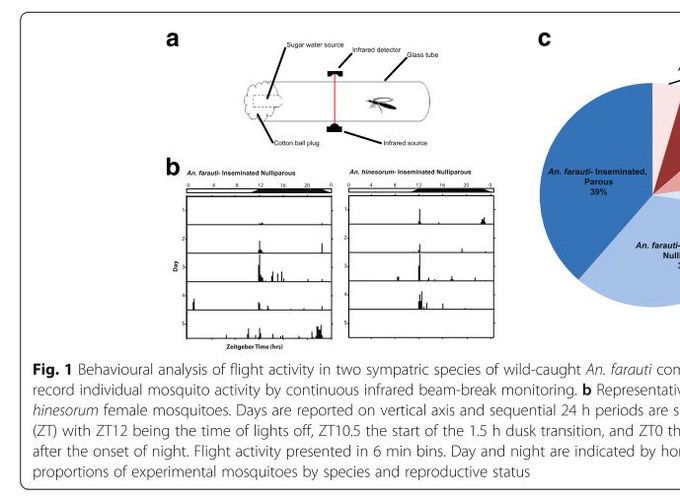 Species in the Anopheles farauti complex are major malaria vectors in the Asia Pacific region. Anopheline mosquitoes exhibit circadian and diel rhythms in sugar- and blood-feeding (biting), flight activity, oviposition, and in some species, a short-lived dusk/early night associated swarming behaviour during which mating occurs. A behavioural study of wild-caught mosquitoes from Queensland, Australia was conducted to investigate the differences in diel rhythmic flight activity between two cryptic species in several reproductive states. The 24-hour flight activity of individual adult female mosquitoes under light/dark cycle conditions were monitored with a minute-to-minute time resolution using an infrared beam break method. Mosquitoes were analyzed for reproductive state (insemination and parity) and identified to species [An. farauti (s.s.) Laveran and An. hinesorum Schmidt] by PCR analysis. We compared daily total flight activity, timing of activity onset, the peak in early nocturnal activity, and patterns of activity during the scotophase (night). Species-specific differences between An. farauti and An. hinesorum were observed. Compared to An. farauti, An. hinesorum had an earlier onset of dusk activity, an earlier peak in nocturnal activity, and a higher level of activity at the onset of darkness. Small differences between species were also observed in the pattern of the dusk/early-night bouts of activity. A second nocturnal peak in inseminated nulliparous An. hinesorum was also observed during the middle of the scotophase. The behavioural differences between these two sympatric species of the An. farauti complex might contribute to subtle differences in habitat adaptation, the timing of host-seeking and/or sugar-feeding activity. This study provides baseline data for analysis of populations of mosquitoes from other geographical regions where these species are malaria vectors, such as in the Solomon Islands and Papua New Guinea. This is important as selective pressures due to long-term use of indoor residual spraying of insecticides and insecticide-treated bed nets are shifting the nocturnal profile of biting behaviour of these vectors to earlier in the night.

Supplementary notes can be added here, including code and math.